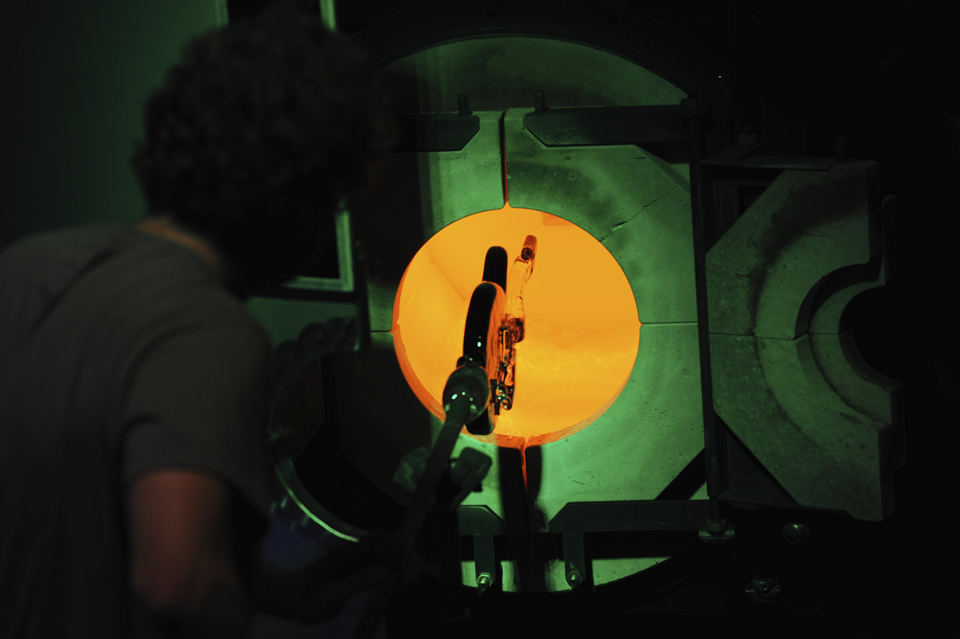 Hot Glass Oven courtesy of The Corning Museum of Glass

Aristotle claimed: "We are what we repeatedly do. Excellence, then, is not an act, but a habit."

Some people and some organizations live this truth every day. Never settling for the success they have worked hard to achieve, but instead always working harder to become even better.

The Corning Museum of Glass is one such organization, made up of scores of those very people. 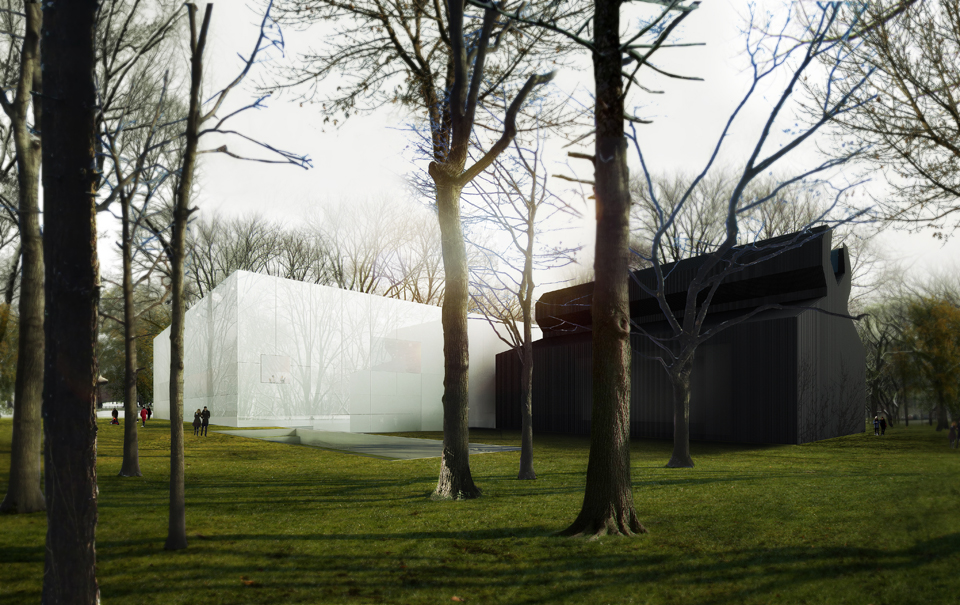 On Friday, March 20th the museum will unveil the new Contemporary Art + Design Wing, yet again revealing to the rest of the world its indelible habit for being extraordinary.

I mean, the world's largest glass museum is going to nearly double in size and will "feature the largest space dedicated to contemporary glass anywhere in the world." That's pretty darn cool! And quite a wonderful habit. 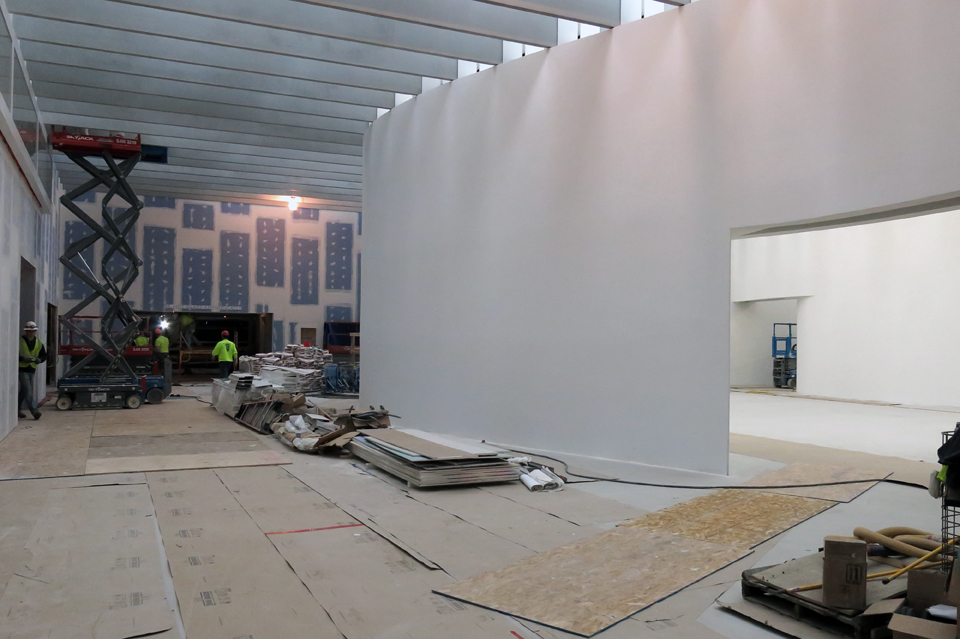 Here's a guest post by one of the museum's hard workers, Kim Thompson. Take a look at what's in store for the museum and for the people who go there.

What to Look For: A Guide to the Contemporary Art + Design Galleries

The Contemporary Art + Design Wing is the largest space dedicated to contemporary glass anywhere in the world.

The galleries will feature more than 70 works from the Museum's permanent collection, including recent acquisitions and large-scale works that have never before been on view due to space restriction in the current contemporary glass gallery. 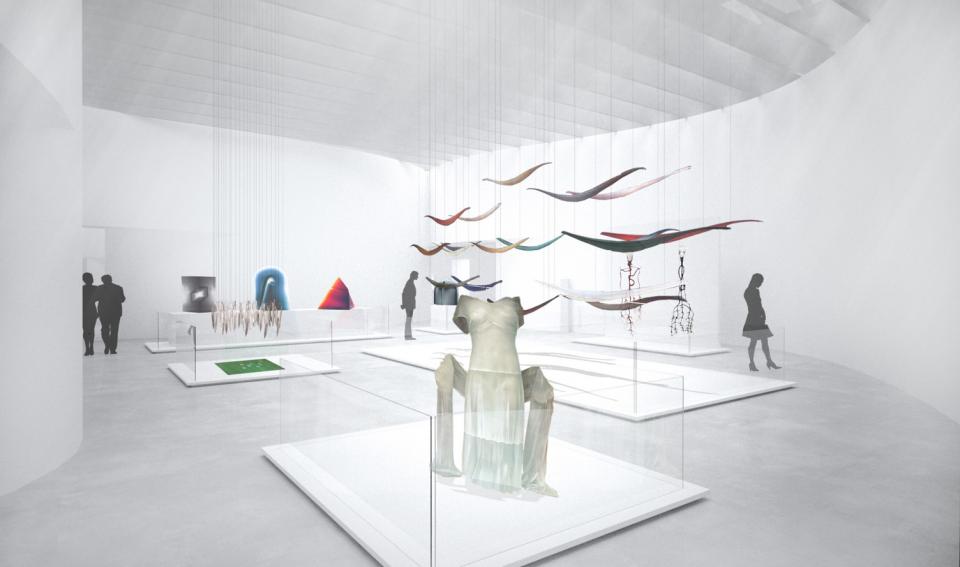 It was a tall order, determining how to showcase the past 25 years in glass. Artists began working on a larger scale than ever before, incorporating new materials and mixed media into their designs.How to organize the works? What stories should the galleries tell?

"I knew themes that were big in contemporary glass anyway, and wanted to talk about the work using categories," said Tina Oldknow, senior curator of modern and contemporary glass. "I've never had an opportunity to have more than one room in which to display work, so this is a way to up the ante a little bit on how glass is shown." 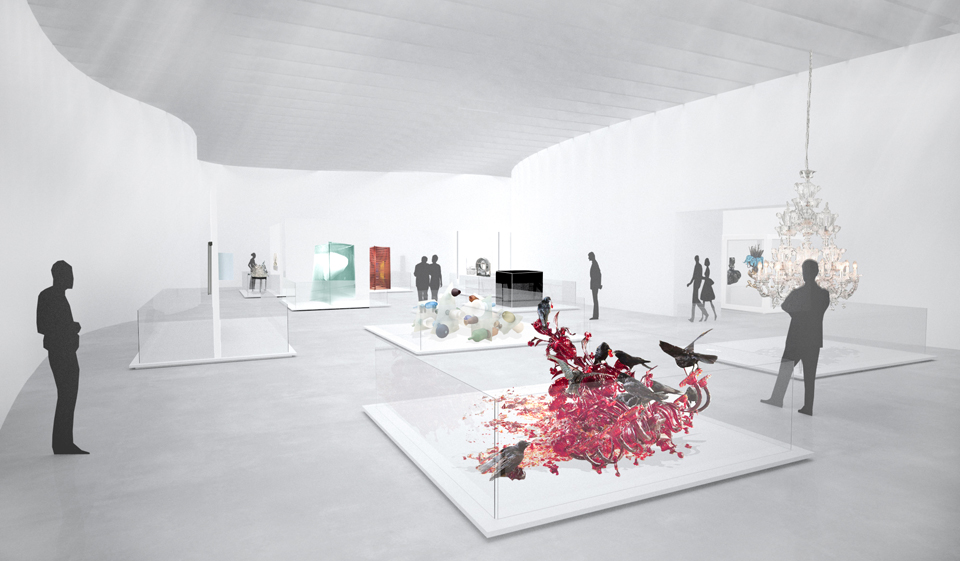 Exciting pieces in the new galleries including works on view for the first time.

Visitors approach the new galleries through the Promenade that presents the idea of glass as a material for contemporary art with large-scale works.

Choreographed Geometry (2007) by Klaus Moje is a four-panel painting composed of more than 22,000 hand-cut strips of glass that have been heat-fused together.

Fog (2007) by Anne Gardner is a suspended sculpture in which hanging mosaic-covered pods in grays and whites imitate the atmospheric condition of clouds that are opaque one moment and translucent the next.

To Die Upon a Kiss (2011) by Fred Wilson draws its name from the dying words of Shakespeare's Othello, and is inspired by the highly decorative chandeliers that adorn the palazzos lining Venice's Grand Canal. In this work, Wilson refers to the enduring, but rarely discusses, African population in Venice. The color of the sculpture gradually shifts from opaque black at the bottom to colorless glass at the top, depicting the slow ebb of life.

The Nature Gallery is dedicated to sculptures that refer to the natural world.

On Extreme Fragility (2003) by Anne and Patrick Poirier is inspired by the famous glass flowers made for Harvard University by the 19th-century Bohemian glassmakers Leopold and Rudolf Blaschka. 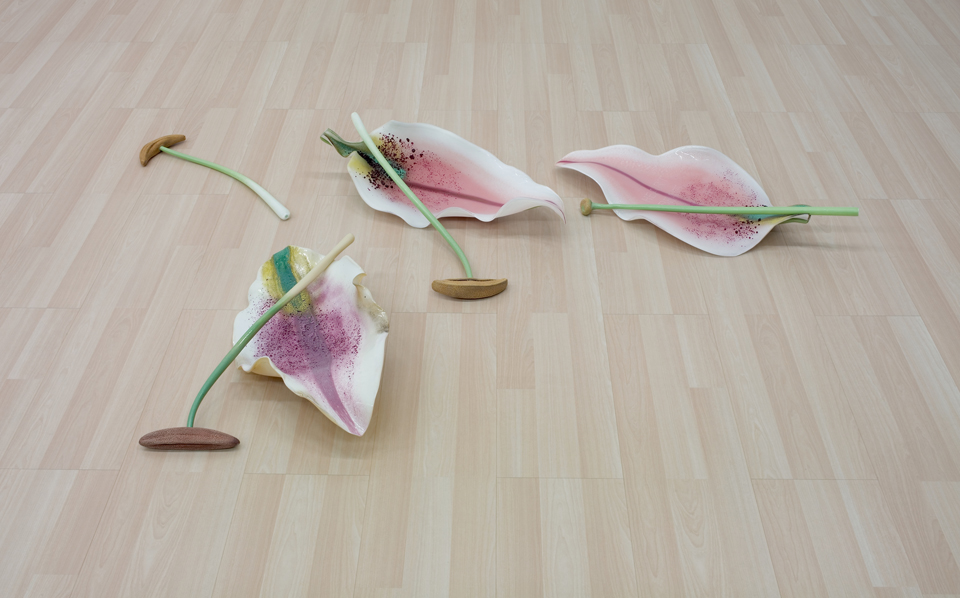 Still Life with Two Plums (2000) by Flora Mace and Joey Kirkpatrick is a giant bowl of glass fruit meant to heighten our awareness of the world around us, including our dependence on nature and its cycles and seasons. 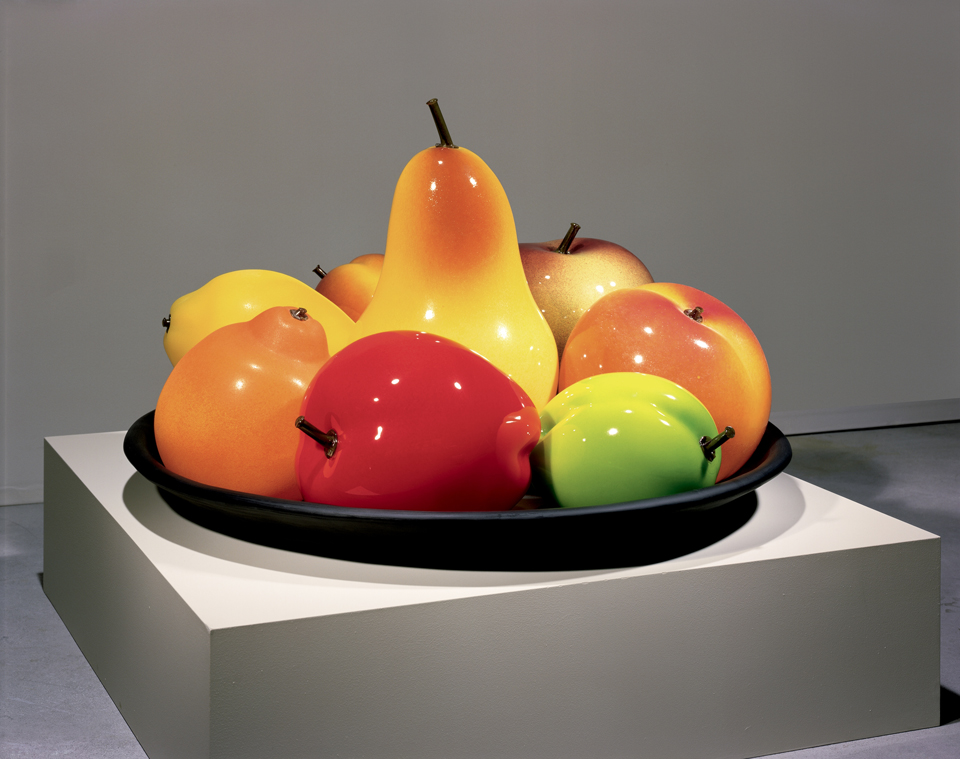 Forest Glass (2009) by Katherine Gray is an installation of thousands of reclaimed green, colorless, and brown drinking glasses arranged on shelves to suggest a stand of three trees. Inspired by the process of creating glass, which historically required the burning of timber to power the furnaces, Gray questions the impact of glassmaking on the environment in the past and present. 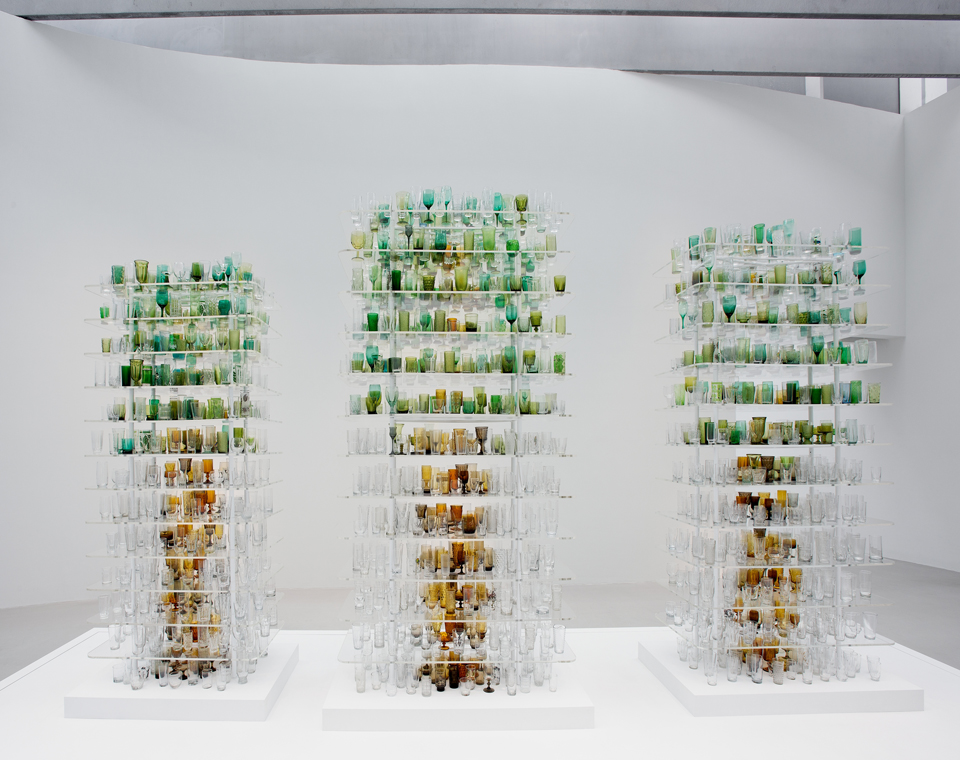 The Body and Narrative Gallery focuses on works inspired by the human body.

Imprint of an Angel II (1999) by Stanislav Libenský and Jaroslava Brychtová is an abstract shape based on a man's shoulders and chest, its mysterious interior space representing the inner light, or the divine part of man. 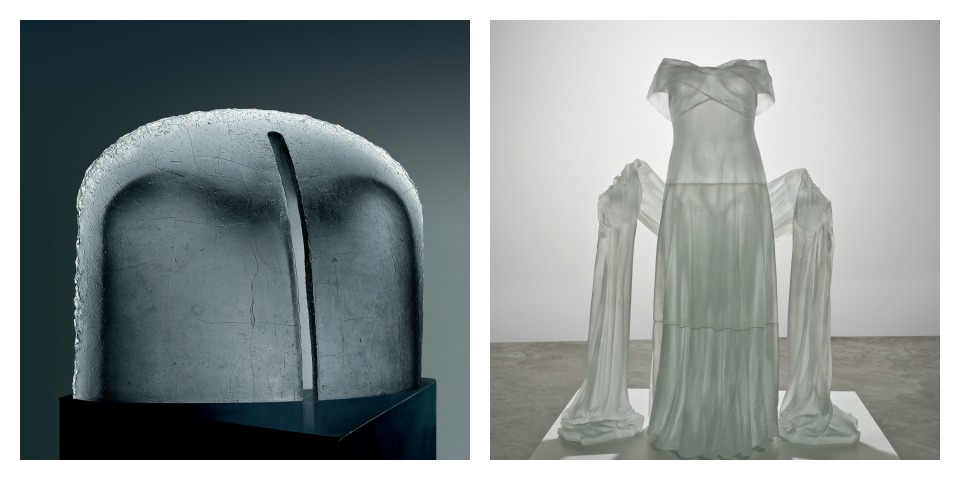 (2004) by Karen LaMonte is a haunting evocation of the beauty of classical statuary.

Endeavor (2004) by Lino Tagliapietra features abstract forms inspired by the boats that gather in the Venetian lagoon for the annual Festa della Sensa. 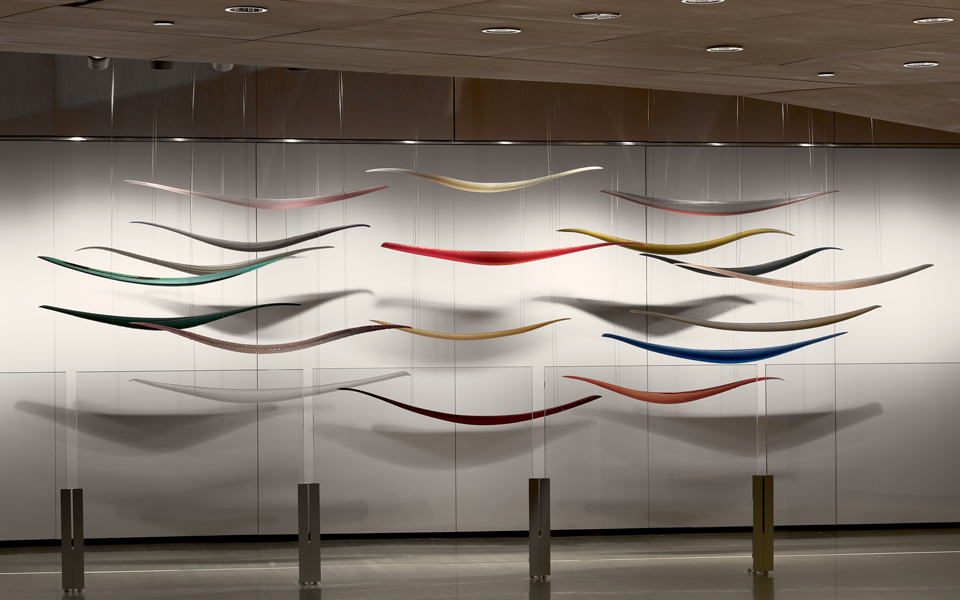 Endeavor by Lino Tagliapietra courtesy of The Corning Museum of Glass

The History and Material Gallery presents works that reflect the manipulation of traditional forms in glass and focus on its material properties.

Material Culture (2008) by Beth Lipman references and recontextualizes functional vessels so that we understand them in new ways. The abundance of objects explores the idea of amassing large collections of objects, and the cultures of excess.

Carroña (Carrion) (2011) by Javier Pérez exploits the beauty and drama of Venetian chandeliers, creating a statement very different from that of functional lighting fixtures. The installation is meant to evoke opportunistic birds gobbling carrion by the side of the road, a metaphor for the gradual disappearance of the traditional glass industry in Murano, Italy. 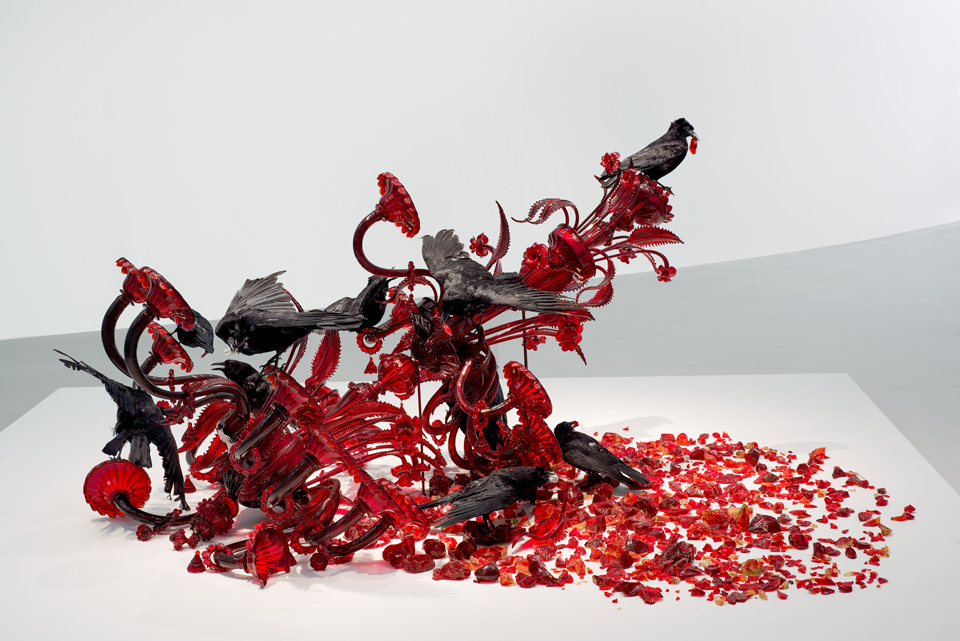 Carroña courtesy of The Corning Museum of Glass

Tire (2005) by Robert Rauschenberg is meant to be ambiguous and highly ironic, while urging viewers to consider everyday objects in new ways. It explores the idea that a rubber tire—humble, dirty, industrial, and ecologically adverse—is recreated in colorless glass and presented as a thing of exquisite beauty. 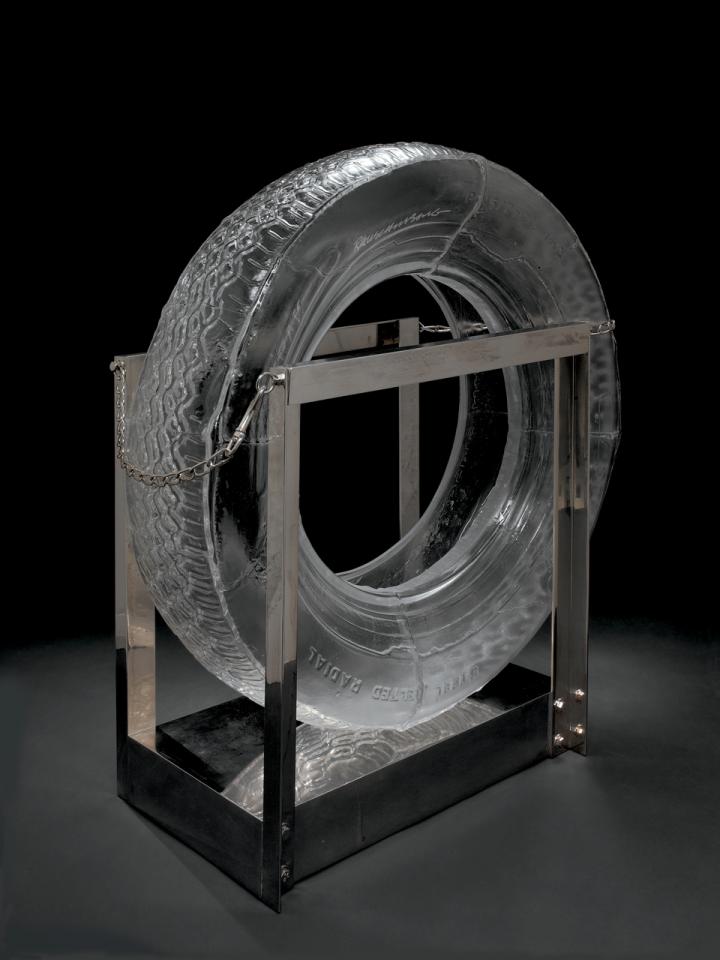 Tire by Robert Rauschenberg courtesy of The Corning Museum of Glass

The Design Gallery will be devoted to international design from the past 25 years and feature a range of functional glass vessels, furniture, lighting, and design art.

Etruscan Chair (1992) by Danny Lane is constructed of colorless glass that has been chipped, ground, polished, drilled and assembled with fabricated metal. 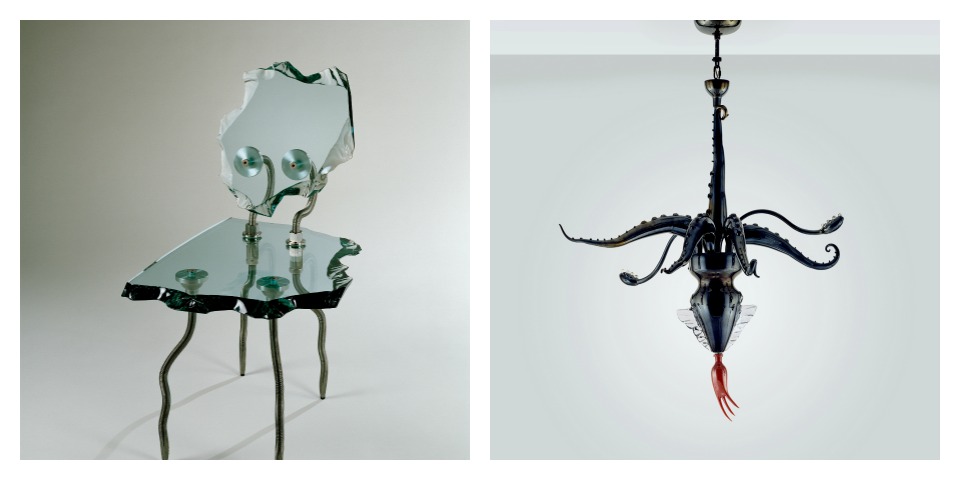 (2003) by Maria Grazia Rosin is both a chandelier and a sculpture. The octopus—with its waving arms, murky color, and staring eyes—evokes the mysterious depths of the ocean. The eyes are illuminated with fiber-optic lighting, and the deep black glass is enlivened with iridescent purple, blue, green, and gold sparkles.

Eye Prototype (2011) by Sigga Heimis was made at The Corning Museum of Glass as part of GlassLab, a pioneering collaboration between international designers and master glassmakers from the Museum. 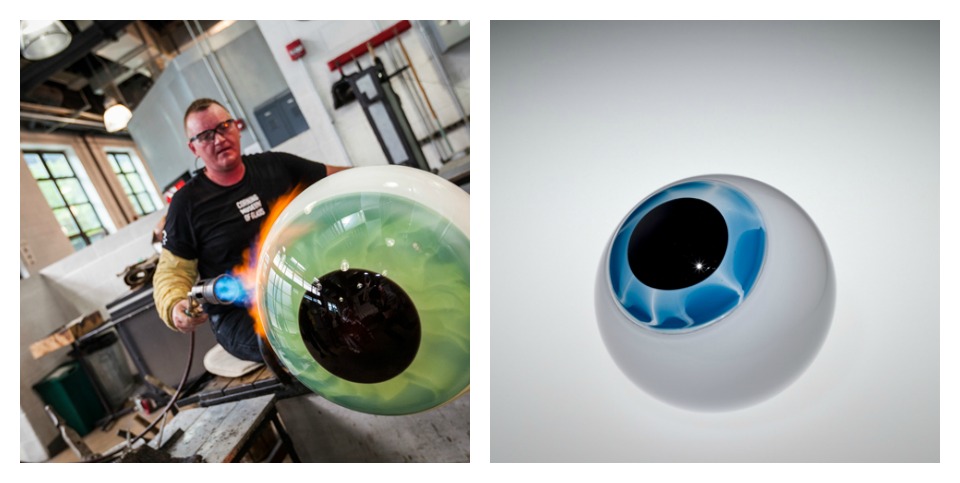 The Special Temporary Projects Gallery will be a changing space in which large-scale installations can be displayed.

Constellation (1996) by Kiki Smith is a room-sized installation that will be on view until March 2016. It is a meditation on the infinity of space and the human desire to understand it, bringing the heavens to earth. Twenty-six hot-sculpted glass animals of different sizes represent different animal-themed star patterns. Smith designed the piece after a 19th-century celestial atlas, and worked with Venetian maestro Pino Signoretta to produce it. 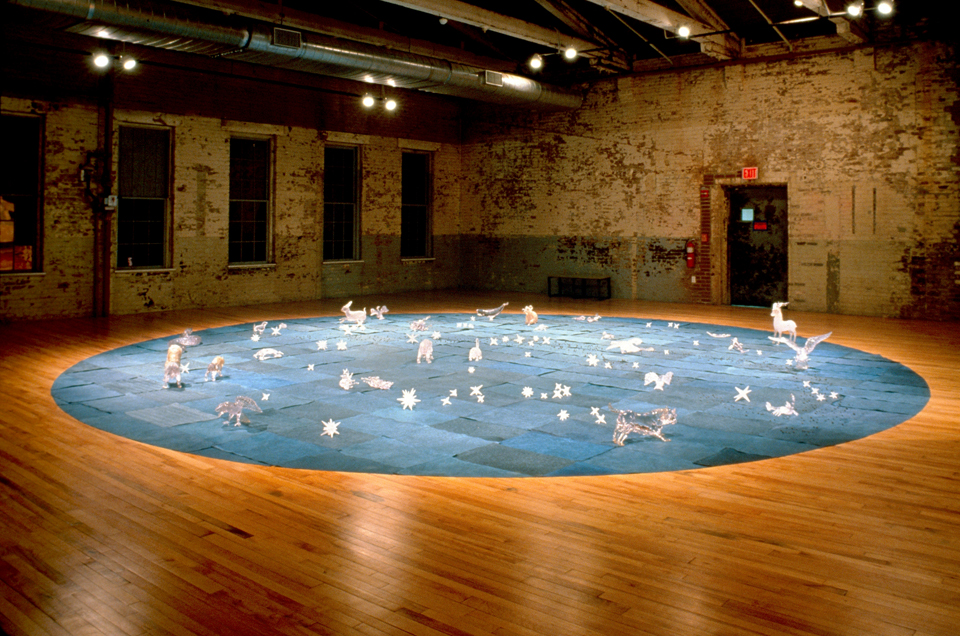 Constellation by Kiki Smith courtesy of The Pace Gallery

The Porch is the display area around the themed galleries which overlooks the Museum's new one-acre green.

The White Necklace (2007) by Jean-Michel Othoniel is a floor-to-ceiling necklace composed of 51 irregularly-shaped blown glass beads, made to demonstrate how glass beads may participate in the larger context of contemporary art.

Continuous Mile (2006-2008) by Liza Lou consists of black glass beads sewn onto a continuous mile-long cotton rope that is coiled into a circle. Lou spent several years working with a team of beadworkers from several townships in KwaZulu-Natal, South Africa, to create the piece. 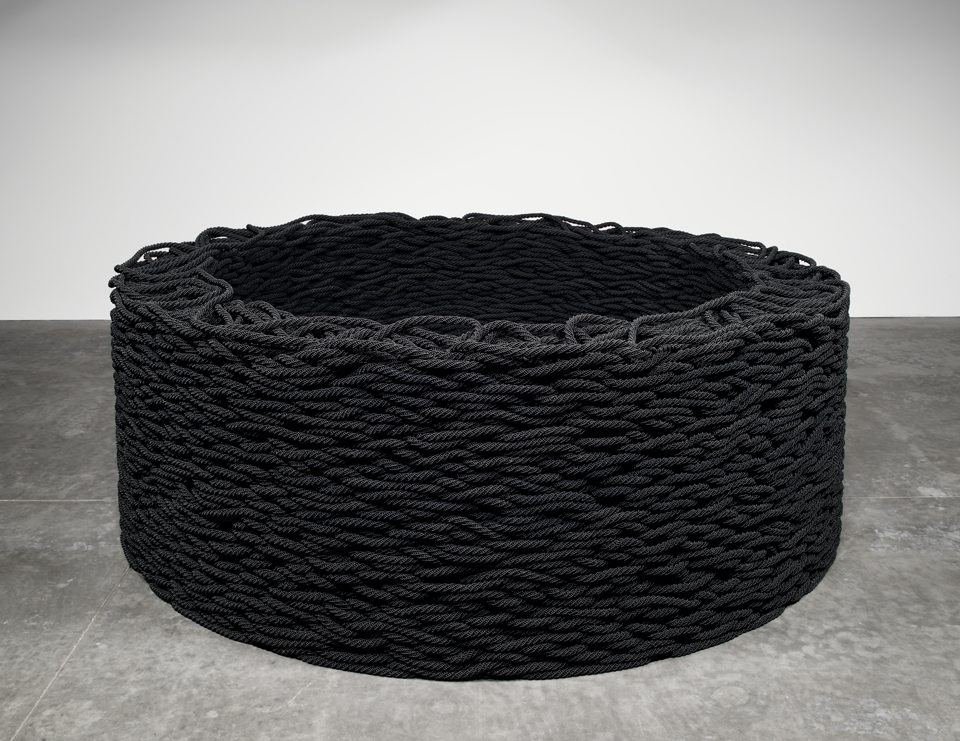 Untitled ("The peacock likes to sit on gates or fenceposts and allow his tail to hang down. A peacock on a fencepost is a superb sight. Six or seven peacocks on a gate is beyond description, but it is not very good for the gate. Our fenceposts tend to lean and all our gates open diagonally"). (2013) This large, abstract sculpture by Roni Horn is made of lime-green glass, and cast in one block. The work was removed from the mold and left in its natural, flawed state. When exposed to light, the sculpture captures and reflects moments of instability and change, which will be readily apparent in the skylit gallery.

Look out world, things are heating up at The Corning Museum of Glass where they're presenting the beauty of glass in a whole new light. 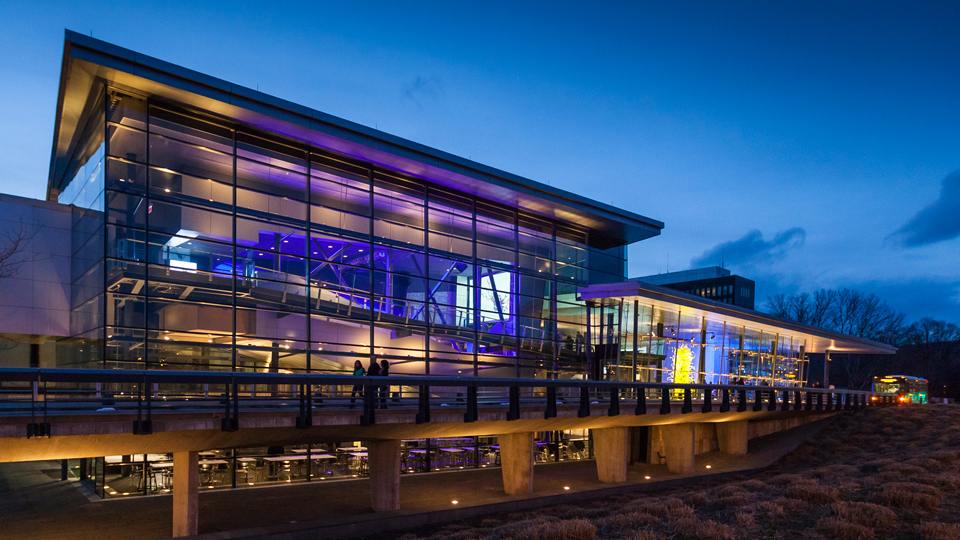 Night courtesy of The Corning Museum of Glass