Let Learning Take Flight this Summer at the Curtiss Museum

Interested in history? How about airplanes? What's better than that? History and airplanes combined! Throw the Navy into that mix, and you've got a reason to celebrate. 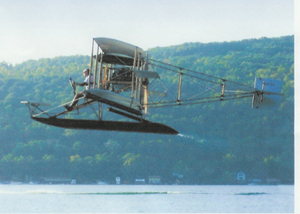 Hammondsport has a very significant reason to break out the party hats this year. Exactly 100 years ago, Glenn H. Curtiss convinced the Navy that airplanes were the next big thing.

It was in July of 1911 that Navy Lt. Theodore Ellyson traveled from California to Hammondsport to take delivery of the Curtiss A-1 Triad, the first naval airplane. Ellyson had taken flying lessons from Curtiss in San Diego and had become U.S. Naval Aviator No. 1.

The Glenn H. Curtiss Museum hosted a gala in celebration of the anniversary Saturday evening. Capt. Chuck Downey, the youngest naval aviator during WWII, and Capt. Richard Dann, director of history for the Navy on the centennial celebration, both spoke of Curtiss's involvement in the Navy.

"Everything that began in 1910 and 1911 led up to the Navy buying airplanes," said Capt. Dann. "It can't be underestimated."

This year, the Curtiss Museum has a special exhibit on display: Glenn Curtiss, Father of Naval Aviation. Explore the fascinating history of Curtiss's role in Naval airplanes. 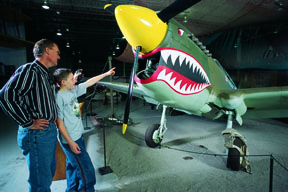 Captain Washington Irving Chambers was given an assignment to see if aviation could be useful for the Navy. When he approached the Wright brothers, they didn't want to be involved in such a "wild scheme," said Trafford Doherty, director of the Curtiss Museum. But Curtiss and his pilot Eugene Ely excitedly seized the opportunity.

Although Ely was able to make the first successful flight off a ship in November 1910, it was Curtiss's landing of a hydroplane next to the USS Pennsylvania that really sealed the deal for the Navy. "The Navy didn't want an airplane that could land on a ship, they wanted one that could land alongside a ship," Capt. Dann said. Curtiss landed, they hoisted the plane aboard, he stayed for lunch, they lowered it back into the water, and Curtiss taxied to shore.

"We probably would have gotten to a point with airplanes in the Navy," said Capt. Dann, "but not as quickly and not as efficiently without Curtiss."

Take a trip through history this summer and browse the collection at the Curtiss Museum. Explore Curtiss's early work with motorcycles and view some classic engines he designed. View a full-sized reproduction of the "June Bug," the plane Curtiss flew during the first pre-announced public flight in America - which earned him pilot's license no. 1. Make sure you stop to see the replicated A-1 Triad in the Father of Naval Aviation exhibit. Also check out the other featured exhibit: Civil War in Art and Artifacts. 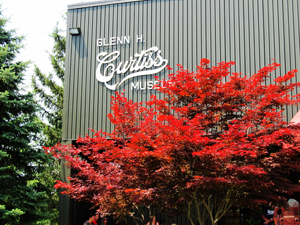 Plan ahead to attend the 8th Annual Seaplane Homecoming Sept. 16 - 18, during which time, a parade of seaplanes will fly over Keuka Lake and make their way to the Pleasant Valley Cemetery to circle the Curtiss gravesite. Seaplane rides will be given at the lakefront throughout the weekend.

The Finger Lakes region is full of fun opportunities during the summer months. Let learning take flight, and see why Hammondsport is called the "cradle of naval aviation."